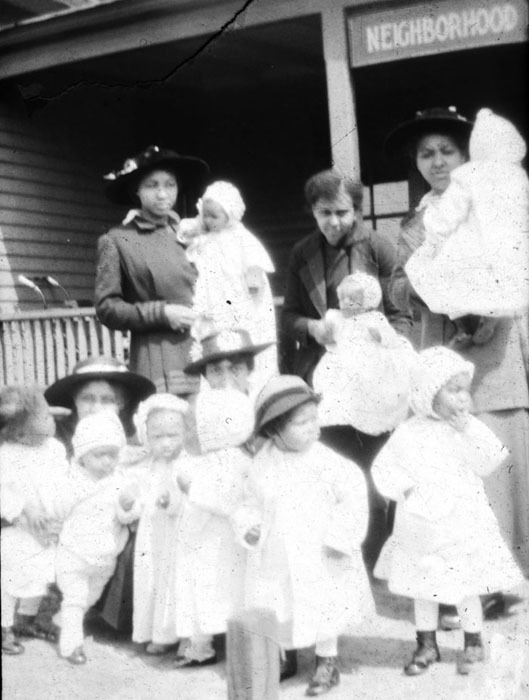 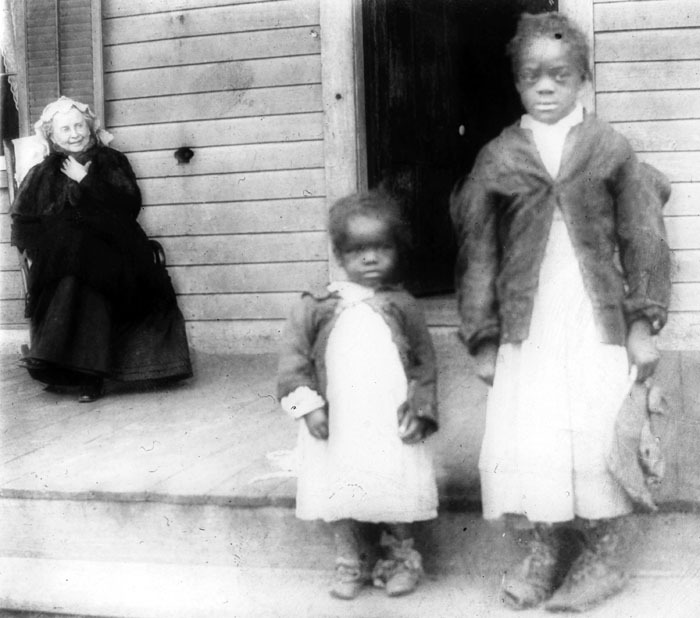 Mrs. Jones and two newcomers to the Leonard Street Orphans Home, founded in 1890 for girls by L.M. Lawson and directed by Amy Chadwick from 1903 to 1936; orphans attended Spelman for free.

The mission of the schools that were to comprise the AUC was community service, primarily the training of teachers and minsters. In preparing these professionals, and in training the physician, nurse, artisan, social worker, and others, the institutions helped supply the schools, churches, hospitals, and other agencies in rural and urban areas throughout the country. The Center, therefore, has had significant educational and social impact not only on the Atlanta community, but also on Georgia, the South, and the nation. Center schools were a major force in community development and in the provision of health and social services to the families in the surrounding neighborhood. The Sumner Hill and South Atlanta communities, for example, where Clark was located before 1941, were shaped by the presence of that institution. Even the streets are named after Clark and Gammon presidents: Melden, Thirkield, and Thayer. University Homes, which was completed in 1937, was the first Black public housing project in the country. It was largely the accomplishment of John Hope, who at that time was president of Atlanta University. He believed that improving the physical environment of Beaver Slide, The neighborhood adjacent to the schools of the Center, would contribute to the social well-being of its residents.

President Hope's wife, Lugenia Burns, had earlier addressed the social ills of the surrounding community by founding the Neighborhood Union in 1908, with the help of other teachers, faculty wives, and neighbors.   Among its numerous activities were the establishment of a playground on the Morehouse campus, neighborhood improvement campaigns, and a health center, which included a clinic for babies; the conduct of surveys of public schools and housing conditions; and the organization of clubhouses for boys and girls, and classes in reading, sanitation, music, and citizenship. Instruction on home care and home economics was also a high priority. This Black settlement house was the first social work agency of its kind in the South, and it became a model for other urban communities in the country.

MacVicar Hospital, which was established at Spelman in 1900, was the first such institution for Black women in the South. It also served as a training facility for nursing students. 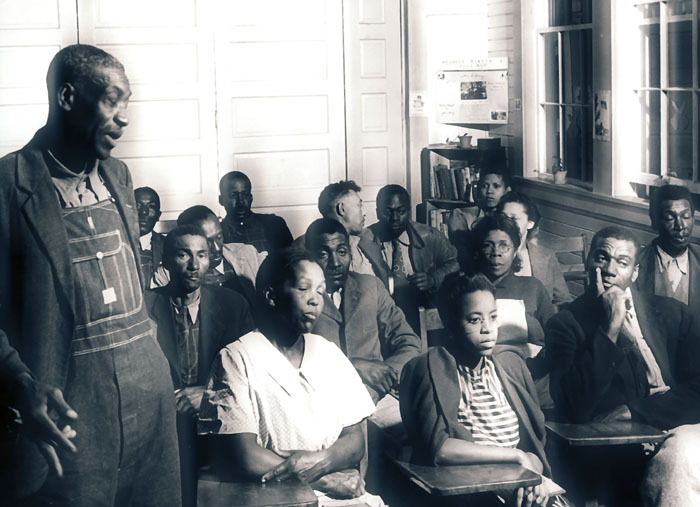 People’s College, an adult education program founded in 1942 by Dr. Ira Reid of AU and taught by Center faculty

Adult education was a logical extension of the Center’s mission. In 1941, Atlanta University established People's College with assistance from other Center faculty and local Black businesses, schools, and churches, which donated services and classroom space. For ten-week sessions in the fall and spring, as many as five hundred persons gathered for instruction in such subjects as elementary English and government. Those attending included domestics, laborers, businessmen, housewives, postal clerks, nurses, ministers, and others from diverse backgrounds.  The tuition was free, although there was a registration fee of fifty cents. 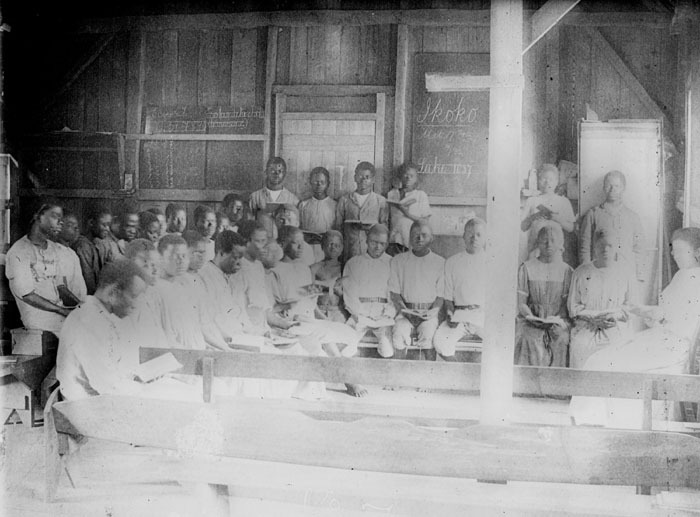 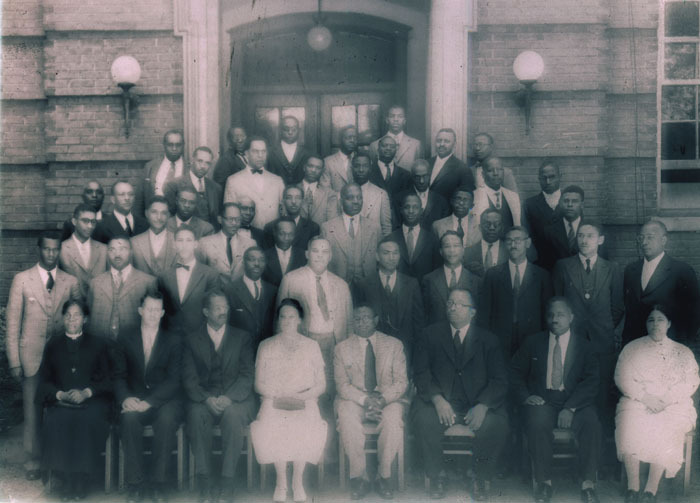 Annual Institute for the Training and Improvement of Baptist Ministers, which was founded in 1945, and was co-sponsored by Morehouse and the Home Mission Board of the Southern Baptist Convention, c. 1950s. 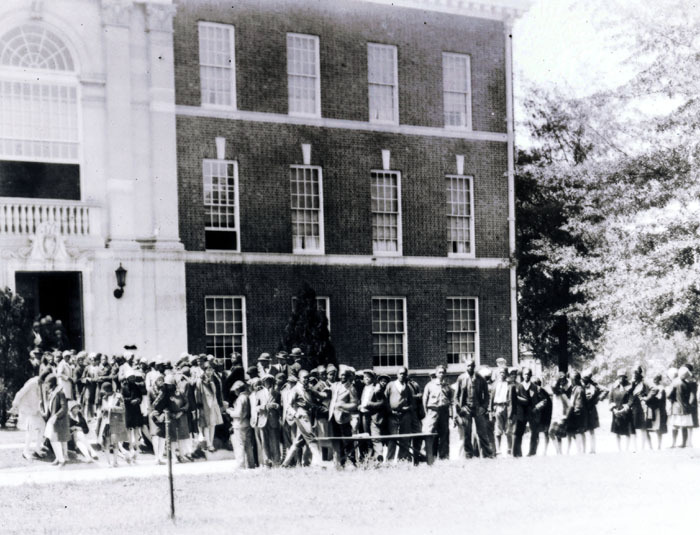 Public attends Harmon Foundation exhibit of paintings by black artists, Spelman, 1929; On one day over 1000 attended.

The cultural impact of AUC schools on the community has been immeasurable. Since Blacks were prohibited from patronizing White facilities, the schools became a major center of cultural activity. The annual spring and Christmas concerts of the various glee clubs are among the many programs which attracted a large number of community people. The Spelman-Morehouse Christmas Carol Concert and the Christmas Concert performed by the Morris Brown Concert Choir at Big Bethel Church are old traditions. In addition to providing entertainment for Atlantans, the glee clubs and other musical groups have made annual tours throughout the country and abroad to promote the institutions and demonstrate the cultural heritage of the Center. Many nationally-known artists performed at special events. Marian Anderson, for example, made her first appearance in the South at Spelman in 1936 largely as a result of the efforts of President John Hope. In 1942, Atlanta University initiated a National Art Exhibition which showed the best works by living Black artists.

Through the training of missionaries. the Center‘s outreach extended ultimately to Africa. The schools have had a long and mutually beneficial association with that continent. The first Spelman graduate to become a missionary was Nora Gordon, who was sent to the Congo in 1899. Lena Clark Whitman, who completed Spelman’s Missionary Training Course in 1895, joined Nora Cordon to teach at a mission school in lkoko. Bonds between American Blacks and Africans were strengthened with the establishment in 1894 of the Stewart Missionary Foundation at Gammon Theological Seminary, which prepared Clark students for missionary service. The schools also trained Africans for service in their countries. The first African to attend Morehouse was Alexander Horton of the Class of 1916. He returned to Liberia with his wife, Ora Milner, a Spelman graduate, and established a school and village among the Bassa called Community Heights.

It was fitting that the schools which were to comprise the largest Center for Black education in the world recognized their responsibility to the homeland. 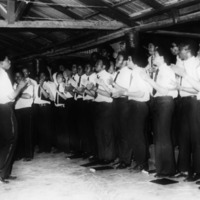 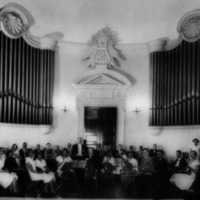 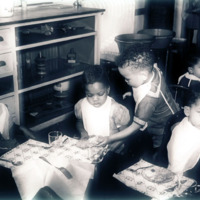 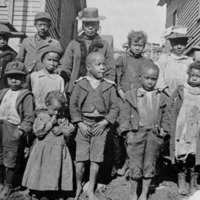 Mary Ann Brooks, back row center, who was a student in the primary department of Spelman in the morning, taught these neighborhood children in the afternoon 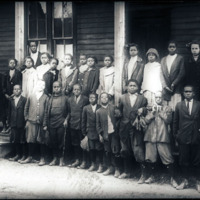 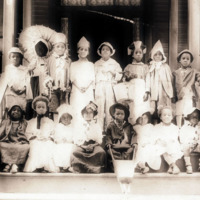