The Committee on Appeal for Human Rights (COAHR) organized and conducted several successful boycotts. Following the arrest of Dr. Martin Luther King, Jr. and others in October, the focus of the Fall campaign of 1960 was the boycott of major downtown merchants such as Rich’s Department Store and Woolworth’s. Atlantans were encouraged to shop elsewhere, particularly during the lucrative holiday shopping months.

Downtown merchants, led by Dick Rich of Rich’s Department Store, did enter into conversations with Mayor William B. Hartsfield in an effort to end the boycott, but because they refused to fully desegregate their facilities, the students would not relent. It was not until March 7, 1961 that an agreement was announced, but it was reached by the merchants and older Atlanta businessmen, without the participation of students. In the agreement, desegregation of the stores would occur only after Atlanta city schools were desegregated in Fall 1961.

The students and their allies were angry. Over 2,000 people came together to discuss the agreement on March 10, 1961, at Warren Memorial Church. The meeting was contentious. It was only after Dr. Martin Luther King, Jr. rose to speak and plead for both sides to respect the agreement, that the crowd was calmed. On August 30, 1961, Atlanta schools were peacefully integrated. Within days, downtown stores were too.

More immediate success was found in the boycotts of Colonial and A&P food stores. A few African Americans were employed at these stores, but only in the most menial positions, with no opportunity for advancement. Boycotts of individual stores resulted in the quick hire of cashiers and skilled positions, such as butchers. 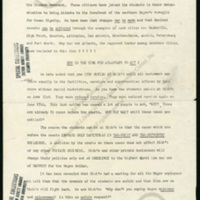 Through this handbill created by the COAHR, Atlantans were encouraged to join the boycotts against Rich’s Department Store and A&P grocery stores. The text shows the power of economic boycott by proclaiming that “Segregation Hurts!” and reporting a 22% drop in profits for department stores targeted by the movement.

Julian Bond (Morehouse College), a member of the Committee on Communications of COAHR, wrote and produced this publication. Bond later became a reporter for The Atlanta Inquirer, the newspaper created by members of the COAHR and supportive community members. 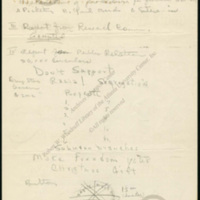 Succinctly illustrating the organized nature of the Atlanta Student Movement, these meeting minutes document the students’ focus on public relations, action plans and the philosophy of their protest. They include plans for the boycott of downtown Atlanta merchants, with possible designs for Christmas cards sold by the Committee. The detailed boycott action plan diagrams the structure of the action (with movement founding chairman Lonnie C. King listed as “Commander in Chief” and Otis Moss as “Field Commander”), notations on procedure, and a final vote to appeal to student participants to choose jail over bail. 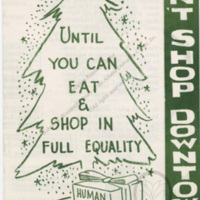 The Committee on Appeal for Human Rights designed, produced and sold this “Christmas Card” as a fundraiser and as part of their ongoing awareness campaign to encourage people to join the boycott of downtown Atlanta merchants. 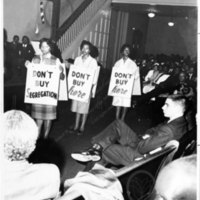 This photograph was taken at a gathering of students and their supporters at Wheat Street Baptist Church before a boycott protest. The pastor of Wheat Street was Rev. Dr. William Holmes Borders, Sr. Borders was also the Chairman of the Student-Adult Liaison Committee, mediating disputes between the students and older, established African-American leadership. From left to right, the students wearing picket signs are Betty Williamson, Bessie Sellaway and Mary Ann Smith. 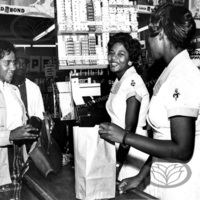 The boycott of A&P and Colonial Food Stores was successful. The clerks in this photograph were among the first African-Americans hired for non-menial positions at the grocery store. 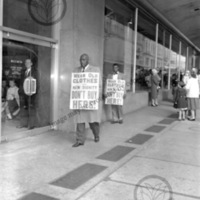 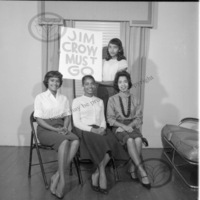 The Atlanta Life Insurance Company is a historic, African-American owned financial institution. In 1960 it was owned and operated by Norris Herndon, graduate of Atlanta University and son of the founder, Alonzo Herndon. The younger Herndon contributed to the success of the Atlanta Student Movement by donating money, providing a free meeting place for the Adult-Student Liaison Committee, and allowing his staff to walk picket lines in front of downtown Atlanta merchants for many months. He also assigned an employee, Maurice Pennington, to design and paint picket signs and to photograph the movement. 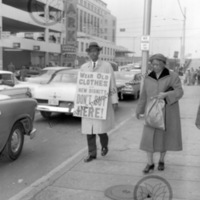 Otis Moss, Jr. (Morehouse College) was a leader of many protests. He is photographed here walking the picket line at Rich's Department Store. 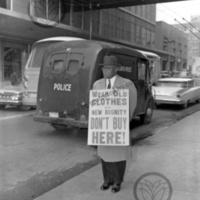 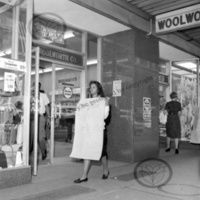 Woolworth's was one of many downtown Atlanta merchants boycotted by the COAHR. 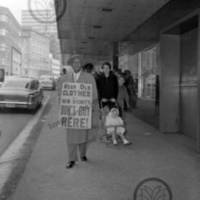 John Wesley Dobbs was considered the "unofficial" Mayor of the Sweet Auburn district, the center of black enterprise in Atlanta. Dobbs had worked through the 1930s to encourage voter registration in the African American community by holding registration drives and co-founding the Atlanta Negro Voters League. He used political means to encourage the gradual integration of Atlanta. Dobbs was the grandfather of Maynard Jackson, who would go on to become the first black mayor of Atlanta. 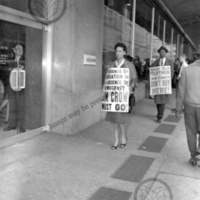 Mrs. Johnny Yancey was one of the first adults to walk the picket line at RIch's Department Store. She also used her connections in the African American business community to raise funds for the student movement.

M. Carl Holman was a trusted advisor to the movement and worked as editor of The Atlanta Inquirer.