The first sit-in organized by the Committee on Appeal for Human Rights (COAHR) was on March 15, 1960 at 11 a.m. The students chose to target downtown lunch counters in federally owned buildings or sites of interstate commerce: City Hall, the State Capitol, Fulton County Courthouse, the Trailways and Greyhound bus terminals, the railroad stations and two federal office buildings. Seventy-seven students were arrested that day.

On May 17, students gathered at Trevor Arnett Library on the campus of Atlanta University to march through downtown Atlanta in commemoration of the sixth anniversary of Brown vs. Topeka, Board of Education. Their plan was to march from campus, past the state capitol, and to end at Wheat Street Baptist Church for a mass meeting. Governor Ernest Vandiver promised that state troopers would be called to the capitol building. Over 2,000 marchers were stopped by City of Atlanta police, and march-leader Lonnie King was told to divert, or be arrested. The march was diverted with no violence.

Throughout 1960-1961, the COAHR would organize many more sit-ins, as well as picket lines and boycotts of local businesses, kneel-ins at white churches and legal actions against the City of Atlanta. 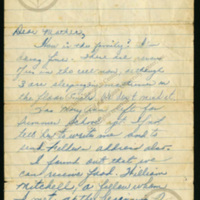 Many of the students who participated in the Atlanta protests went on to be activists in other areas of the South. The Student Nonviolent Coordinating Committee (SNCC) was founded in 1960 with offices in Atlanta, and worked as a partner with COAHR. Ruby Doris Smith wrote this letter to her mother after being jailed for her participation in a SNCC protest in Mississippi. Her letter describes students sleeping on the floor, and asks her mother to send cookies; her tone is cheerful despite her imprisonment. 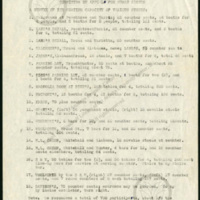 This report, detailing plans for sit-ins, was given at a meeting of the Committee on Appeal for Human Rights. It includes the seating capacity of the Rich’s lunch counter and other stores in downtown Atlanta. 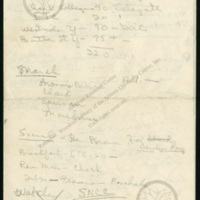 A list of delegates to COAHR, including student supporters from the Westside and Butler Street branches of the YMCA, is included in these meeting minutes. 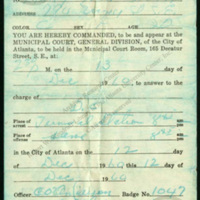 In December of 1960, COAHR staged a series of “Freedom Rides” from Atlanta bus stations to other Southern cities. The goal was to sit in at segregated waiting rooms throughout the South. Rides were led by Maurice Pennington to Chattanooga; Otis Moss, Jr. and Charles Black to Columbia, SC; Leroy Washington and Norma June Wilson to Jacksonville; and sisters Mary Ann Smith and Ruby Doris Smith to Birmingham.

Mary Ann Smith was arrested on her return to Terminal Station in Atlanta and was issued an arrest receipt. In a stunning example of her commitment to the ideals of the Atlanta protests, she labeled it her “dignity receipt.” 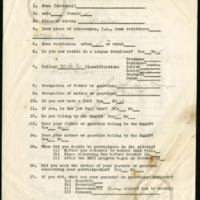 Students were asked to fill out these surveys by the Committee on Appeal for Human Rights to not only collect information about participants, but also to ensure that students under 18 were not put into situations where they might be arrested. 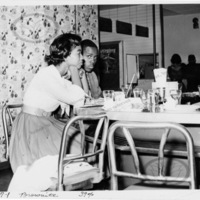 Shortly after this photograph was taken, an unidentified man threw a bottle at Mary Ann Smith, narrowly missing her head.

In 1960, Mary Ann Smith was Secretary of the Student Government Association of Morris Brown College. She was one of the six signers of An Appeal for Human Rights. 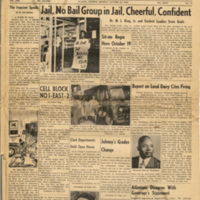 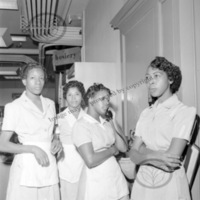 Many African-American employees of picketed businesses (lunch counters, and department and grocery stores) were fired from their jobs, even if they did not participate in the demonstrations. 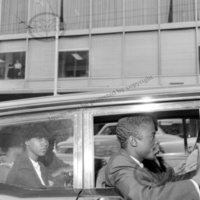 In 1960, Ben Brown was President of the Student Government at Clark College. He was arrested many times during demonstrations. 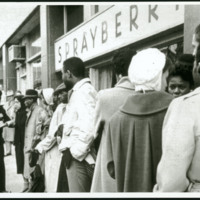 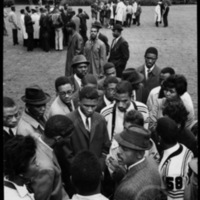 Students assemble on Atlanta University’s campus for a mass sit-in demonstration on October 19, 1960. 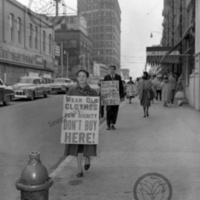 Students from Anges Scott and Emory also joined the AUC students in demonstrations.