Protests against slavery in the United States are as old as the institution itself. Before the Emancipation Proclamation, African Americans took an active role in speaking out for freedom and equal rights. The black press played an important role in providing a voice to a people and a movement.

The earliest black owned newspaper in the United States was Freedom's Journal, first published in 1827 by Samuel Cornish and John Brown Russworm. The stated goal of the paper was to serve as a dialogue for people of color, to bring them together and create a space to discuss their needs and debate their plans. As Cornish and Russworm wrote in their first editorial, "We seek to tell our own story because too many others have falsely told it."

In 1829 another major publication was written by an African American in the abolitionist movement. David Walker was the Boston agent for Freedom's Journal when he wrote An Appeal to the Coloured Citizens of the World, a scathing assesment of slavery.

Walker examined slavery from the perspective of both the Bible and the Declaration of Independence, and found it irreconcilable with those documents. He called for enslaved and free people alike to take their freedom, writing "There is a great work for you to do, as trifling as some of you may think it. You have to prove to the Americans and the world that we are MEN..."

Walker published three editions of his Appeal before his "mysterious" death in 1830.

Frederick Douglass was a prominent former slave, philosopher and abolitionist. He also founded and published several newspapers from 1827-1959. Douglass authored dozens of books, and, in his "West India Emancipation" speech, predicted that the freedom struggle would be a long and difficult one, writing,

Let me give you a word of the philosophy of reform. The whole history of the progress of human liberty shows that all concessions yet made to her august claims, have been born of earnest struggle. The conflict has been exciting, agitating, all-absorbing, and for the time being, putting all other tumults to silence. It must do this or it does nothing. If there is no struggle there is no progress. Those who profess to favor freedom and yet depreciate agitation, are men who want crops without plowing up the ground, they want rain without thunder and lightening. They want the ocean without the awful roar of its many waters.

Douglass was particularly critical of President Abraham Lincoln; he considered the movement toward Emancipation to be too slow. Douglass also protested at the White House against the unequal pay of African American soldiers in the Union Army. The enrollment of African American men in the Union Army is perhaps the greatest illustration of active protest against slavery.

After Emancipation and the end of the Civil War, African Americans were faced with a long battle to reconstuct their lives, their homes and their communities. After meeting with a group of black ministers in Savannah, Georgia, General William Sherman gave Field Order No. 15, also known as "forty acres and a mule." The ministers convinced Sherman that freedom would not come to African Americans just by ending slavery; they must also have the means to remain economically independent of their former masters.

In the period of Reconstruction after the Civil War, the federal goverment established the Bureau of Refugees, Freedmen, and Abandon Lands, commonly referred to as  Freedman's Bureau.  The Bureau provided food, housing, medical aid, legal assistance, and helped establish schools. Also the Bureau attempted to provide land to former enslaved people from the Confederate lands that had been confiscated or abandoned during the Civil War. The goal was to give the new freedmen the tools, either agrarian or educational, to be economically successful.

During Reconstruction, many African Americans men were able to vote for the first time, and some held local, state and national offices. In Georgia, 37 black men were involved in the framing of a new state constitution of 1868, and 32 black men were elected to the General Assembly - 29 Representatives and 3 Senators.

By the 1870s, Georgia, and many other Southern states, had reverted from Reconstruction and returned to a primarily white power structure, with political offices held by ex-Confederate soldiers.  Laws were passed to again place restrictions on  African Americans lives, to disenfranchise and keep them out of politics and governance, and placing heavy taxes on land ownership creating a system of sharecropping. Despite these burdens, African Americans made progress and continued to struggle for equal rights. 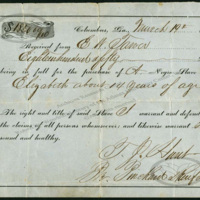 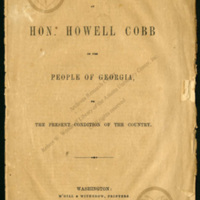 This statement to the people of Georgia describes the abolitionist platform of the Black Republican party in the 1860 election. 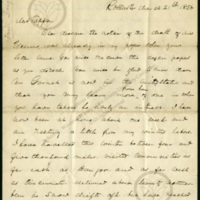 In this letter to a friend, abolitionist Frederick Douglass says that he can think of nothing that "can be done for the free people of color remaining in their present employment." Rather than act as servants to whites, Douglass felt that free people needed employment in non-dependent trades. He speaks of his desire to establish an industrial school. 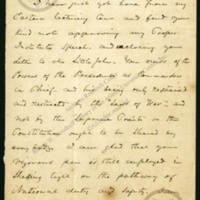 In this letter, Douglass praises a friend for his willingness to criticize policies of the President. Douglass ends the letter with his hope that "I am doing some good in my day and generation." 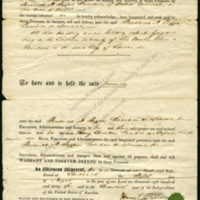 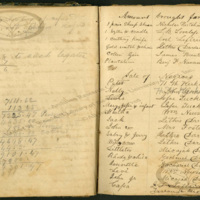 This estate book from 1850 in Georgia lists slaves, and their monetary values, sold after the death of their master.