Segregation in the City Too Busy to Hate

In the 1960s in an effort to promote Atlanta as a racially progressive city and to distinguish Atlanta from the racial violence occuring in other Southern cities, city leaders coined the moniker "The City Too Busy Too Hate."  Belying this marketing slogan were the deeply embedded segregation laws, policies and practices that restricted all aspects of African Americans' lives. Despite these barriers, African Americans were making progress, but always within the constraints of racial inequality.

A major proponent of continued segregation in the South was the local government’s reluctance— and often outright refusal—to enforce its own laws. Even after the Supreme Court had ruled against segregated schools in 1954, Atlanta schools remained segregated until 1961. Likewise, Grady Hospital was ordered by the Supreme Court to desegregate all of its facilities in 1962; Grady did not desegregate in full until 1965. 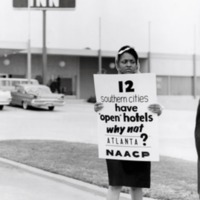 The NAACP was one of many groups that picketed segregated public facilities in Atlanta. 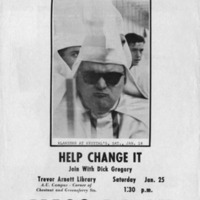 A flyer for a mass rally hosted by Dick Gregory, a black comedian and civil rights activist. The flyer shows a "Klansman at Krystals," labeling Atlanta as racist at its core. 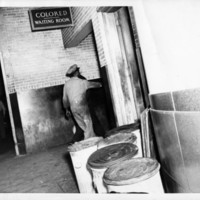 The outside of a building with segregated waiting rooms, located in a back alley next to garbage cans. 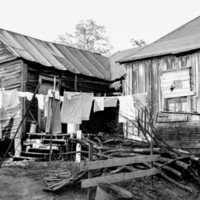 Many poverty-stricken blacks were forced to live in derelict housing in Atlanta's slums. 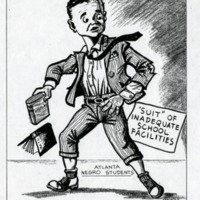 "Needs a Size 45.1 per cent…", a Maurice Pennington cartoon illustrating the lack of proper resources for black schools and their students.

An excerpt from an informational handbill on black educational facilities, "The Negro School Child in Atlanta, A Report in Picture."