W.E.B. Du Bois and the Rise of Black Education 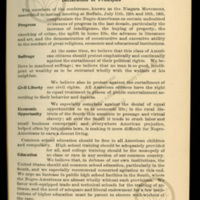 This declaration of principles from the Niagara Movement was published by Atlanta University and states "We believe also in protest against the curtailment of our civil rights." 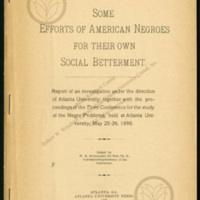 Du Bois organized and hosted an annual "Conference on the Study of Negro Problems" at Atlanta University. 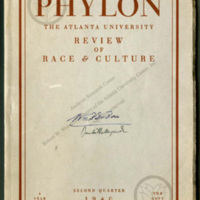 Du Bois also founded Phylon, a journal published at Atlanta University, dedicated to examining the relationship of race and culture.

In the decades after Emancipation, African Americans continued to work for the betterment of their communities. Education, which had been denied to so many during the era of slavery, was seen as a pathway to full citizenship and true freedom.

W.E.B. Du Bois was an important figure in the development of African-American education and the philosophy of the 20th century freedom movement. A Fisk Univeristy and Harvard educated historian and sociologist, Du Bois joined the faculty of Atlanta University in 1897. He distinguished himself and the programs at AU by conducting rigorous sociological studies, hosted conferences, and published extensively about the impact of slavery and class on the oppression of black people.  While at Atlanta University, Du Bois penned his seminal work, The Souls of Black Folks, which laid bare the impact of slavery and race on American society.  He also founded and edited the journal, Phylon: The Atlanta University Review of Race and Culture.

Du Bois did much to earn his reputation as a leading educator, and a radical spokesperson for African-Americans. Du Bois opposed the “Atlanta Compromise,” articulated in a speech given in 1895 by Booker T. Washington, founder of Tuskegee Institute. This compromise traded the good behavior of Southern blacks for basic educational and economic freedoms from whites. DuBois felt strongly that blacks should be fighting for equal rights, not compromise.

Du Bois may be best known for the concept of the “talented tenth.” He believed that full citizenship and equal rights for African Americans would be brought about through the efforts of an intellectual elite; for this reason, he was an advocate of a broad liberal arts education at the college level. This was in direct opposition to Washington’s emphasis on industrial education.

Du Bois was a founder of the Niagara Movement, a collective of civil rights activists who drew up a statement of principles opposed to the Atlanta Compromise.  Also he was a founder of the National Association for the Advancement of Colored People (NAACP) and edited its journal, Crisis, for many years.